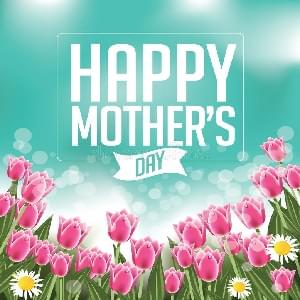 Mother’s Day is Sunday:
Hallmark says Mother’s Day is the third-most popular card-buying holiday, with 162 million cards sold. That’s because so many people use the occasion to celebrate relationships with sisters, aunts, and other important women in their lives, it. (Only Christmas and Valentine’s Day are bigger.) And among Hispanics, Mother’s Day is the single biggest card day of the year.
The National Retail Federation predicts total Mother’s Day spending will reach $23.6 billion this year, the highest in the 13 years it has tracked the holiday. Mom will get $5 billion spent on jewelry –bought by 36 percent of shoppers– another $4.2 billion on special outings such as dinner or brunch and $2.6 billion on flowers (the most common gift).
About 80 percent tell the NRF they’ll also buy Mom a greeting card.
The NRF reports that consumers spend about $172.22 on average on their Mom.

Flowers for Mother’s Day:
You know you should get your Mom some flowers this weekend. But a study published in Environmental Health Perspectives makes the case for upping your game and getting her a plant that will last longer. Harvard researchers find American women who live in homes surrounded by a lot of vegetation have significantly lower mortality rates than women who live in areas with less greenery.
Researchers with Harvard and Brigham and Women’s Hospital used data from more than 100-thousand women enrolled in the Nurses’ Health Study across the United States. After analyzing satellite imagery, they found women who lived in the greenest surroundings had a 12 percent lower overall mortality rate versus those living in the least green areas; a 34 percent lower rate of respiratory-related deaths and a 13 percent lower rate of cancer deaths compared with those who had the least vegetation around their homes.
The researchers theorize women in woodsier areas are insulated more from air pollution, noise, and extreme heat, but also may benefit from increased opportunities for physical activity and social interaction, and therefore lower stress levels. Improved mental health, measured through lower levels of depression, was estimated to explain nearly 30 percent of the benefit from living around more trees.

What Mom’s say:
The Media Post blog, Engage: Moms asked more than 13-hundred moms for their thoughts on taking a night off and Mother’s Day in general. Some findings:
–82 percent believe they deserve a night off; however, the greatest challenges are money and finding childcare.
–When mothers do take a night off, they worry most about their spouse not putting the kids to bed on time. Some even report a fear of Dad falling asleep on the job.
–The majority reports having a night out with friends only twice a year while their spouse or partner averages one night a month.
–Over half would elect to have dinner and drinks at their favorite restaurant on a night off followed by going to a chick flick.
–Overwhelmingly, moms wear black when they go out for a mom’s night out; however, they elect jeans over a dress and heels; 76 percent of moms prefer to take their hair out of the ponytail and wear it down.
–39 percent would be willing to give up their favorite snack for one year in order to have a night out with friends once a week. Another 28 percent would give up television.
–29 percent feel guilty while they are out, while 37 percent feel relaxed, and 13 percent even feel victorious in managing to take a night off.
–The service moms most like to receive to escape from the daily routine is a massage (47 percent) followed by a manicure and pedicure (38 percent).

10 Best moms ever (source: Time magazine):
10. Dumbo’s mom (Mrs Jumbo)
9. The moms of “The Joy Luck Club”
8. Gaia (also known in English as “Mother Earth”
7. Rusty Dennis in “Mask”
6. Jochabed, Mother of Moses, who made a basket and floated him downstream after Pharoah declared that all newborn Jewish males be killed.
5. Florida Evans from “Good Times”
4. Whistler’s mother.
3. Hester Prynne from “The Scarlet Letter.”
2. Marge Simpson. “She’s sweet, simple, unflappable, and like Edith Bunker before her, she uses her goodness as a shield from the crudeness of her husband and the never-ending needs of her kids.”
1. The Queen Mother, From “Aliens.” “She’s protecting her babies, trying to find them safe haven and nutritious food to make them grow into big, strong healthy aliens. Like all good moms, she will take out anyone who is a threat. Focused (perhaps to a fault) on guarding her young, she is the ultimate mother warrior. And she doesn’t even expect her kids to buy her flowers on Mother’s Day. Now, that’s a champ.”

Best cities for Moms:
The online magazine The Daily Beast has its ranking of the best cities for Moms.
The rankings used data from the U-S Census Bureau to rate quality-of-life for moms, based in each city’s educational quality, childcare, maternity health specialists and number of “moms-per-capita.” The top 10 cities for moms are:

The 10 Best Moms on the Tube:
10. MICHELLE DUGGAR “19 Kids and Counting”
9. “Roseanne Connor” from “Roseanne” –played by ROSEANNE BARR
8. “Samantha Stevens” from “Bewitched” –played by ELIZABETH MONTGOMERY
7. “Lucy Ricardo” from “I Love Lucy” –played by LUCILLE BALL
6. HARRIET NELSON from “The Adventures of Ozzie and Harriet”
4/5. (ti) “Marion Cunningham” from “Happy Days” –played by MARION ROSS and DONNA STONE from “The Donna Reed Show.”
3. “Carol Brady” from “The Brady Bunch” –played by FLORENCE HENDERSON
2. “Claire Huxtable” from “The Cosby Show” –played by PHYLICIA RASHAD
1. “June Cleaver” from “Leave It to Beaver” –played by BARBARA BILLINGSLEY (Source: 2013 Harris Poll )

It’s this singer’s second time as a One to Watch!… END_OF_DOCUMENT_TOKEN_TO_BE_REPLACED

It’s time to meet this week’s One To Watch!… END_OF_DOCUMENT_TOKEN_TO_BE_REPLACED

Always about the money…… END_OF_DOCUMENT_TOKEN_TO_BE_REPLACED